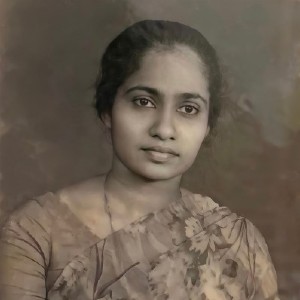 Ammini Malayil, our beloved wife, mom, and Amma, passed away peacefully on June 8, 2021, surrounded by her family.

Ammini will be dearly missed by her husband of 55 years, George, also lovingly known as Pappachen, and children, Nina (Mark) and Joe (Goretti) and grandchildren, Lily, Daniel, Asher, and Arianna. She is also survived by her brother Baby and sisters, Molly and Phyllis. Her youngest sister, Phyllis (or Philly) would prove to be a soulmate to Ammini and together with their husbands and children be two families joined by one heart.

Born in 1937 in Kerala, India, Ammini grew up in a happy, lively and supportive home. Quickly identified for her academic excellence, she was lovingly encouraged to pursue further studies after high school. She ultimately chose to pursue a medical career and graduated from JIPMER medical institute in Pondicherry, India in 1964. In 1966, she married Pappachen and together they started 55 years of a life together which saw their love steadily grow and the opportunity and adventure of living in Toronto, Canada, as a new and young couple. Their family quickly grew there with the arrival of Nina and Joe. Ammini and Pappachen together instilled in their children the core values of hard work, loyalty, generosity and connection with others.

Ammini was able to successfully work as a medical consultant and then assistant medical director at the Worker’s Compensation Board from 1971 until her retirement in 2001. Despite juggling the demands of working full-time and regular family life, there was always time for weekend family friend get-togethers, road trips to the extended family within North America, and travels back to Kerala. After her retirement, Ammini was able to enjoy the fruits of her labour with the ability to travel to far-reaching destinations of the world, pursue her quiet creative hobbies and most importantly be a fun, relaxed and sometimes crazy grandmother or “Amma.” Even with a diagnosis of ovarian cancer eight and a half years ago, her fortitude and grace shone.

Never complaining and often more worried about others, she faced the demands of her illness with bravery and calm perspective. We will always appreciate her oncology and palliative care teams at Princess Margaret Hospital in treating and understanding her as an individual and giving us more blessed and intimate time to be together as a family. A private family funeral service was held on Friday, June 11. In lieu of flowers, we request that donations be made to St. Vincent de Paul or Ovarian Cancer Canada.