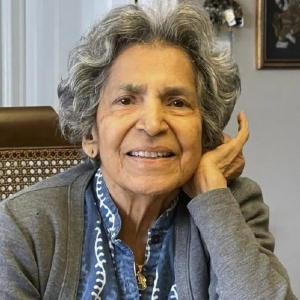 We are deeply saddened to announce the passing of Dr. Indra Rastogi, beloved mother and mother-in-law of Roop and Mona, Veera and Munish; devoted grandmother to four grandsons, Akshay, Arjun, Sachin and Rishi; and cherished sister of Krishna and Vishnu Agarwal.

Indra left this world at home, where she wanted to be, and with her son, Roop, her daughter, Veera, and her daughter-in-law, Mona, by her side. Indra was born in Pilibhit, India, as the second of two daughters in a family of four children. Her parents believed in higher education for all their children and by a very young age, Indra had already determined that she wanted to deliver babies. She went on to attend King George's medical college (where she, importantly, also met the love of her life, Hirsch) in Lucknow, India, at age 16, and completed her medical degree and her residency in obstetrics, finishing at the top of her class.

In 1963, Indra and Hirsch married and immigrated to North America, ultimately settling in Hamilton, Ont., where she established an immensely fulfilling practice in obstetrics and gynecology  — a practice that would span five decades and serve the greater Hamilton community and beyond. Indra was known for being a highly skilled and compassionate surgeon who was adored by her colleagues and patients. She had an exceedingly busy practice, and her office staff would often comment that she must have been wearing roller skates to be moving at the rate she did. She could not set foot outside the house without being recognized as having delivered someone's baby (or multiple babies).

In addition to her medical practice, Indra was an active and influential member of the Hamilton Indo-Canadian community and the Hindu Samaj temple. She played an important role in raising the first generation of Indo-Canadian children with an appreciation of Indian culture, including: music, dance, acting and language. Indra was a woman of countless talents: when she wasn't working she could be found cooking, sewing, knitting, doing macrame, embroidery or learning a new language or a new style of dance. She was often seen walking in the neighbourhood at lightning speed. Together with Hirsch, Indra also had a passion for international travel, which they shared with their children while they could. They travelled to many far-flung places, reaching innumerable countries on six continents.

As Hirsch's health declined, Indra's primary focus became caring for him until his passing in 2018, a testament to their 55-year marriage and devotion to one another. Friends referred to Indra as Superwoman — she really was. In the last three years, Indra faced and fought several challenging health conditions, including Parkinson's disease. Her strength and feisty spirit, despite these challenges, were remarkable. We are blessed for the time we had with her and are grateful that she is no longer suffering.

We are indebted to Indra's team of caregivers, who are true angels, two of whom — Paula Cain and Blessing Makosa — were with her for several years and on the day she died. We'd also like to give special thanks to Dr. Ronan Foley, for whose compassion and expertise we are truly grateful.

In lieu of flowers, please consider making a donation to The Parkinson's Foundation.

Memories, tributes and condolences can be shared online.