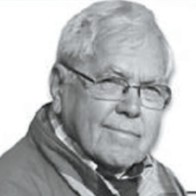 It is with great sadness that we announce the passing of our beloved husband, father, grandfather and great-grandfather, John “Jack” Fry on Sunday, Aug. 15, 2021.

John was born in Windsor on Nov. 28, 1923, to Earl and Ethel (Brook). He married Louise Crowe of North Bay on June 14, 1952, and they recently celebrated their 69th wedding anniversary. He’s survived by their five children: Christopher, Peter, Catherine (Norman) Klass, Holly (Kim) Waters, and Marilyn (Pat O’Donnell) Braithwaite. He is dearly loved by 12 grandchildren, 15 great-grandchildren and many Fry and Armstrong nieces and nephews. He was predeceased by his parents, his brother Earl Jr., sister-in-law Eileen (McFadden), infant sister Kathleen, and son-in-law Paul Braithwaite (2009).

Dad graduated from The University of Toronto in 1947 with a degree in medicine, and later from the university’s very first class of obstetrics and gynecology. He practiced medicine in Windsor for most of his career, in partnership with Dr. Keith MacLeod (deceased, 2021). He delivered many thousands of babies, witnessing the miracle of life daily. He was on staff at all three Windsor hospitals, serving at Met as chief of ob-gyn for 10 years and chief of staff for two.

Dad received the Glen Sawyer Award for authoring the historical publication “Essex County Medical Society 1914–1989, 75 Years of Dedication.” He was a member of the Ontario Medical Society, The Canadian Medical Society and served on the boards of the North American Gynecological Society and Iona College. A member of the Beta Theta Phi fraternity, Dad cherished those friendships that continued throughout his life. He was the longest living male member of Riverside United Church and over the years he served on almost every board there.

Dad received a master gardener certificate from the University of Guelph, and his backyard remains as evidence of this passion. He and Mom were lifelong learners and travelled the world. Their summer vacations were spent on the French River at the family cottage. He also enjoyed reading, stamp collecting, playing bridge, and taking walks. He snow-skied until he was 80.

Dad was a great supporter of the arts including the Windsor Symphony, the Art Gallery of Windsor, Windsor Light, the Detroit Symphony, and the Stratford Festival. He loved the music of the big-band era and was in great demand as a jitterbug partner. He had a devilish sense of humour, was a good teaser and entertained family and friends with funny stories of his life experiences. After retirement, Dad volunteered at The Downtown Mission and the food bank for many years.

He has been cremated and a celebration of life will be held in November. The family requests that memorial gifts be donated to the Riverside United Church Outreach Mission or the charity of the donor’s choice.