This article originally appeared in the Spring 2022 issue of the Ontario Medical Review magazine.

Dr. Kieran Quinn found his passion for palliative care in the first year of his internal medicine residency. One night he was asked to see an elderly patient who had been admitted with pneumonia. The patient had advanced dementia and lived in a nursing home, where he was bed-bound and completely dependent on caregivers.

Dr. Quinn began treating the man’s pneumonia. But he wasn’t sure if that was best for the patient. People with advanced dementia often end up shuttling back and forth between the hospital and long-term-care facilities, when many could be offered palliative care instead. “His suffering was really palpable to anybody who came across him,” Dr. Quinn said. “He would have benefited from avoidance of an often-burdensome hospital transfer and focus on comfort if that was in line with his values and preferences.” But no one had discussed options with the family. When Dr. Quinn did, the family decided he should receive only care to keep him comfortable.

“I continue to witness the suffering of my patients with these terminal, progressive chronic conditions like dementia and heart failure during my daily practice on the medical wards.” —Dr. Kieran Quinn

Ten years later, Dr. Quinn is an internist and palliative care physician at Sinai Health System in Toronto. He said he still sees major problems with how palliative care is delivered in Ontario. But he hopes the province is on the verge of changes that will offer high-quality palliative care to all Ontarians.

“I continue to witness the suffering of my patients with these terminal, progressive chronic conditions like dementia and heart failure during my daily practice on the medical wards.” This is why he is so passionate about improving access to high-quality end-of-life care for his patients with these conditions, to relieve their suffering and improve their quality of life.

In its recently released Prescription for Ontario: Doctors’ 5-Point Plan for Better Health Care, the Ontario Medical Association recommends sweeping changes to how palliative care is funded and provided in the province. The changes would make it easier for people who need palliative care to receive it at home or in their community regardless of their location or circumstances. The plan could also reduce strain on emergency rooms and hospitals, increase overall quality of care, and save money in the long run.

The term “palliative care” refers to treatment that relieves the suffering or improves the quality of life for anyone with a serious illness, including people who are nearing the ends of their lives.

But palliative care doctors say the system is broken in Ontario. Although there is excellent palliative care available in some parts of the province, there isn’t enough of it and not everyone has access, said Dr. Sandy Buchman, a palliative care physician and medical director of the Freeman Centre for the Advancement of Palliative Care at North York General Hospital. “It depends on your postal code,” he said. “And that means that it can work very well in certain areas of the province, and much less well in others.”

Most Canadians prefer to die at home

“Only one in five Ontarians receives a physician home visit or palliative home care in their last year of life, and nearly two in three hospitalizations in the last year of life have no palliative care component,” the report noted. “Instead, most Canadians facing their end of life receive acute care and, as a result, the cost of health-care delivery increases significantly.”

A 2014 Auditor General of Ontario report pointed out a number of problems with Ontario’s palliative care system. A major issue was piecemeal delivery through in-home support, charitably funded hospices, hospitals and long-term-care settings. With no overall strategy and unequal access to care, many patients end up falling through the gaps, the report found.

“Only one in five Ontarians receives a physician home visit or palliative home care in their last year of life, and nearly two in three hospitalizations in the last year of life have no palliative-care component.” —Expensive Endings: Reining In the High Cost of End-of-Life Care in Canada 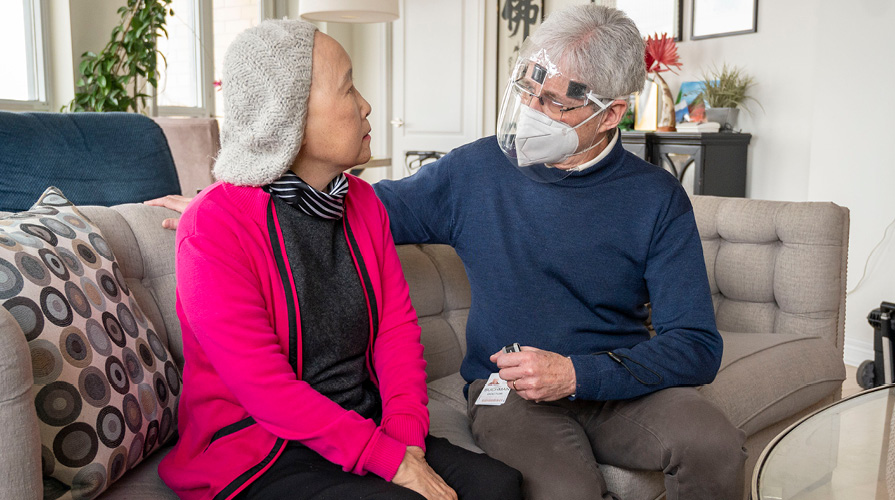 In many parts of the province, especially in cities, some patients have access to excellent palliative care, Dr. Buchman said. In small towns or remote regions, that’s less likely. And even within cities, there’s inequity of access, he said. “People of lower socioeconomic status, racialized populations, can have more difficulty accessing (palliative care). There can be cultural issues, there can be communication issues.”

The stark contrast in circumstances was brought home to Dr. Buchman several years ago. He had just made a palliative care visit to a woman in the well-off Toronto neighbourhood of Rosedale. She was dying of pancreatic cancer but was receiving around-the-clock personal care support and was surrounded by family in a comfortable home.

Then he walked a couple of kilometres south to visit another patient, also with pancreatic cancer, also dying at home, but in a run-down public housing unit with no family to provide support.

“She spent most of her day alone, but despite having the same disease, she only had a couple of hours of personal care per day despite needing so much more. How do we address that? We have to address the underlying social determinants of health,” he said. There were no spots available for her to go to a hospice.

Photo: Dr. Sandy Buchman provides a palliative care home visit to Insoon Lee who has pancreatic cancer. Dr. Buchman remarks that although there is excellent palliative care available in some parts of the province, there isn’t enough of it and not everyone has access.

Too few palliative beds in Ontario

According to the 2014 auditor general’s report, other jurisdictions follow a benchmark standard of seven hospice beds for every 100,000 people. Ontario has fewer than two publicly funded beds per 100,000 people, and those beds are not distributed evenly across the province.

“We need a dramatic increase in not only the number of beds but also in their geographic availability,” Dr. Downar said.

Dr. Buchman is one of the people behind the Neshama Hospice being built in North York. The provincial government has committed to providing $2 million for capital construction but that leaves $16 million to be raised from private donors. “Why should my team and I have to raise millions of dollars to provide a service that should be essential?” he asked.

In 2013, the Ontario Ministry of Health started funding the Community Palliative Care On-Call program, which allowed groups of doctors to provide palliative care 24 hours a day, seven days a week. The specialized care provided through this program allows palliative patients to stay out of hospital and in their preferred setting, often at home.

Thirty teams were approved to receive funding, but no new ones have been funded by the province since 2015. It is estimated that the existing teams cover about 50 per cent of Ontario patients, which means the other half of Ontarians are without access to this program.

The lack of palliative care actually costs the health-care system money. A report from the Ontario Hospital Association found about 17 per cent of patients in acute-care beds were there because they had nowhere else to go. Most were waiting for a bed to open up in a hospice or long-term-care centre. Of those patients, almost 40 per cent were in their last three months of life, and 30 per cent died before they were discharged, according to information from the Ontario Palliative Care Network.

The Expensive Endings report concluded that inpatient palliative care units and residential hospice beds could be appropriate for people with significant symptom control and supportive needs, but there are so few such beds available that admission is usually restricted to people in the final weeks of life. The report said palliative and end-of-life care needs to be provided across multiple health settings. It cannot be the sole responsibility of hospices and palliative care facilities.

The auditor general’s report said paying for the long-term care or palliative care that patients need would cost far less than keeping them in acute-care beds — about $161 million a year less. (The figures have likely risen since that report was written in 2014.)

Photo: Dr. James Downar, an ICU physician and the head of the palliative care division at University of Ottawa, stresses the necessity of increasing not only the number of palliative beds but also their geographic availability.

Dr. Quinn said one improvement would be to break down funding silos, in which different health-care sectors such as acute care or long-term care have their own budgets, and instead make health-care budgets global. Medical professionals must also be trained to help patients plan for palliative care early on, which would make it less likely that they get diverted to acute care.

He said he’s hopeful that improvements are on the way. The Ontario Ministry of Health has recently released its provincial palliative care framework, which lays out what a high-functioning and connected palliative system should look like. The OMA will work with government and key stakeholders to bring the framework to fruition to ensure patients have equitable access to continuous, comprehensive palliative care.

For Dr. Buchman, the need for palliative care became personal recently, when his 99-year-old father arrived home to die. He acknowledged that his family was privileged to have access to care and the resources at home that allowed his father to spend his final days there. He believes the OMA’s palliative care recommendations are necessary to make sure everyone can receive similar care.

“These are the steps that we have to take to achieve improved access and equitable distribution, no matter where a person lives, or what background they’re from, or what their socioeconomic status is. I can’t say enough about how important it is that we have to reach that level for all Ontarians.”

Kurt Kleiner is a Toronto-based writer.