HQ Toronto to offer quick, convenient testing and treatment and a community home for men into men, trans and non-binary people

The health prognosis can be poor for many of the estimated one million people in Canada’s LGBTQ community. They have significantly higher rates of mental health issues, suicide, substance abuse problems, HIV and sexually transmitted infections than their heterosexual counterparts. And the crisis has only worsened during the COVID-19 pandemic.

But for some members of the LGBTQ community in Toronto, a soon-to-open health hub in the city’s downtown core will offer a revolutionary approach to meeting these challenges.

HQ Toronto is slated to open on July 22 and will serve cis men who have sex with men, trans people and non-binary individuals. Unlike other sexual health clinics in the city and province, HQ Toronto will offer physical and sexual health care, mental health care and community and social programming, all under one roof at 790 Bay St.

“In Ontario and Canada and probably the rest of the world, we’re really bad at siloing off the various parts of health care,” said Dr. Kevin Woodward, HQ’s medical director. “You go to a sexual health clinic and say you also want to talk about mental health and they say, ‘that’s unfortunate, let me refer you to somebody else’ and then you’ll wait six weeks and hopefully the other place will take care of you.” That’s not what will happen at HQ Toronto.

What makes the clinic truly innovative is the speed and efficiency with which it will offer sexual health testing and treatment, as well as mental health support. Dr. Woodward said the aim is to get patients who are coming for HIV or STI testing in and out of the clinic within 15 or 20 minutes, with results back to the patient by text or email the same day or the next day. Treatment, if needed, would be offered that same day.

“The more efficient we can make it for people, the more likely that they will access services when they need them,” said Dr. Tim Guimond, HQ’s mental health director. It will also reduce the mental stress of patients waiting days for test results or living with uncertainty under the “no news is good news” approach.

HQ Toronto is building its fast turnaround through a system of self-serve kiosks where individuals will swipe their health card when they arrive, fill in a questionnaire, receive printed labels, then proceed to a self-testing room, where they will collect their urine samples and do their own swabs. (Dr. Woodward said research has shown that patient-collected swabs are equivalent in quality to those collected by physicians.) A nurse or phlebotomist will draw blood, then the individual leaves the clinic. 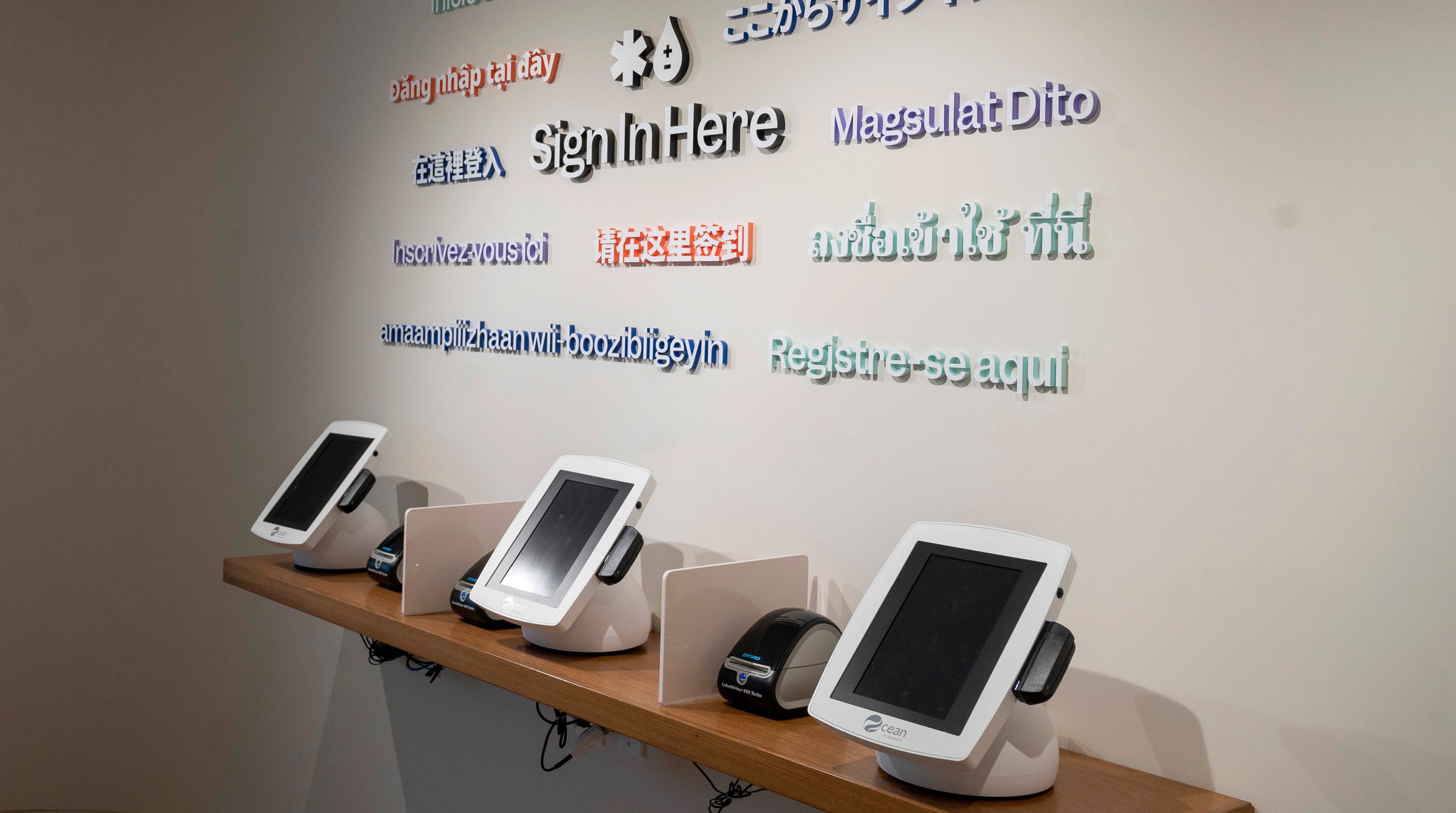 The on-site testing lab can process specimens for HIV and the most common STIs – syphilis, chlamydia and gonorrhea. Other tests will be sent to outside labs.

But the kiosks will be more than a gateway to quick STI and HIV testing. The initial questionnaires will include screening for substance abuse, mental health risk factors and issues, including self-harm and suicidal thoughts. “Right at the kiosk, we will check for suicidality and self-harm and we will respond the same day, hopefully within minutes,” Dr. Guimond said.

Photo: The clinic will provide quick testing and treatment through self-serve kiosks.

“Using the same technology that texts patients their test results, the system will text our staff to say there’s someone here who is suicidal, please come out front and get them help.”

HQ Toronto will use a stepped care approach to mental health support, helping some individuals access resources online or referring some of those with serious problems to outside agencies, including residential or hospital care.

The clinic itself will also offer a comprehensive range of effective, evidence-based interventions for people struggling with depression, anxiety and substance use, as well as trauma therapy for sexual and gender minority individuals, dialectical behaviour therapy for specific mental disorders and help for those with methamphetamine abuse issues.

Mental health care is critical in the LGBTQ community

“HIV, other STIs, syphilis – those rates tend to travel with individuals who are suffering from untreated mental health and substance abuse problems,” Dr. Guimond said. More gay men now die by suicide than from AIDS, he added, and the situation has been exacerbated by two and a half years of isolation in the pandemic. A national study by Allie Slemon and others, published in the Psychiatry Research journal, found that 23 per cent of Canadians who are members of sexual and gender minorities reported suicidal thoughts in the fall of 2020.

“The more efficient we can make it for people, the more likely that they will access services when they need them.” — Dr. Tim Guimond

The third pillar of HQ Toronto’s service will be community and social programming for members of the LGBTQ community, offered by the clinic itself or by its partner agencies who represents folks from the Black, Two-Spirit, Latinx, francophone, Asian and South Asian communities. The clinic will encourage cis men into men and trans people to view HQ as a home, for everything from movie nights and lectures to book readings and spiritual gatherings.

In many cases, social programming will be accompanied by the opportunity for individuals to undergo quick STI and HIV testing in the same evening, if they wish to do so.

Photo: Patients will self-test by collecting their urine samples and do their own swabs, with the on-site lab processing specimens for HIV, syphilis, chlamydia and gonorrhea.

“We will have folks coming from all walks of life, representing different backgrounds,” explained Osmel Guerra Mayne, HQ’s director of organizational development, community and culture. “I am Black and Latino and many people in my community tend not to come out to be tested. But having social programming in a space that is already providing mental and sexual health care breaks down that barrier.”

Many in the LGBTQ community report negative experiences in the health-care system in the past and there is widespread distrust and reluctance to access care. “Among the community, there’s a sense that there’s a need for culturally competent care, for people who understand LGBTQ health, where you’re not going in and having to explain yourself to someone,” Dr. Woodward said. “It’s not the job of the patient to have to explain to the physician or health-care provider what test they should get. And that’s a common occurrence now.”

LGBTQ organizations in Toronto began brainstorming how to build a health hub like HQ Toronto as early as 2012 or 2013. “There’s been a desire to have an LGBTQ space of this nature for a long time,” Dr. Woodward said. “Many other large cities in North America and the world have this type of centre but it’s been a gap in Toronto for quite awhile.”

The Ontario HIV Treatment Network and other organizations took on the idea as a mission, but there were many fundraising and organizational challenges to overcome.

Dr. Woodward said planning started in earnest right before the arrival of COVID-19, and there were delays in construction and technology acquisition as a result of the pandemic.

But “while COVID has delayed us in some ways, it’s also given us opportunities to perfect some of the ways we want to do things and has challenged our thinking about how we could offer mental health and sexual health care in different ways,” Dr. Guimond said. Virtual mental health care, which has grown exponentially during the pandemic, will be offered at HQ Toronto, which will expand its services to people throughout Ontario.

Funding coming from many sources

The Ontario government is providing $600,000 a year in annual funding to HQ Toronto and a number of other organizations have contributed, including the Canadian Foundation for AIDS Research, TD Bank, ViiV Healthcare and Gilead Sciences (both pharmaceutical companies), The P. Austin Family Foundation and the Ontario HIV Treatment Network.

Many of the services offered at HQ Toronto, including STI and HIV self-testing, cannot be billed to OHIP because the patients don’t see a physician at the time of testing. HQ Toronto hopes to have its charitable status in place by the time the clinic opens in July.

The directors’ message to doctors is simple: “Donate. Give us money. Talk to the ministry and get us stable funding,” Dr. Woodward said.

The clinic’s hours will be noon to 8 p.m., Monday to Friday, for STI testing and mental health care. Community and social programming will take place in the evenings and possibly on weekends. HQ’s core staff will start with 13 people, including five physicians, although there will be additional staff on-site from partner agencies. Dr. Woodward anticipates that they can serve 75 to 100 patients a day to start.

With its proximity to many teaching hospitals in Toronto, HQ will also serve as a site of excellence in medical education for those looking for more experience and knowledge in LGBTQ health care, including medical and nursing students, social work students and medical residents.

And how will they get the word out to the LGBTQ community before the July 22 opening?

“The word is already out,” Mayne laughed. “Everyone has already been talking about this in their spaces. We’ve been joking that we won’t even need to advertise.”

Keri Sweetman is an Edmonton-based writer.

What does HQ stand for?