TORONTO, April 25, 2022—Ontario cannot fund its health-care system alone. Ontario’s doctors are calling on the provincial government to take steps in this week’s budget to reverse the chronic underfunding of health care and put pressure on the federal government to contribute its share.

The Ontario Medical Association strongly supports calls by Canada’s premiers for the federal government to increase the Canada Health Transfer to 35 per cent of provincial-territorial health-care spending from the current 22 per cent. 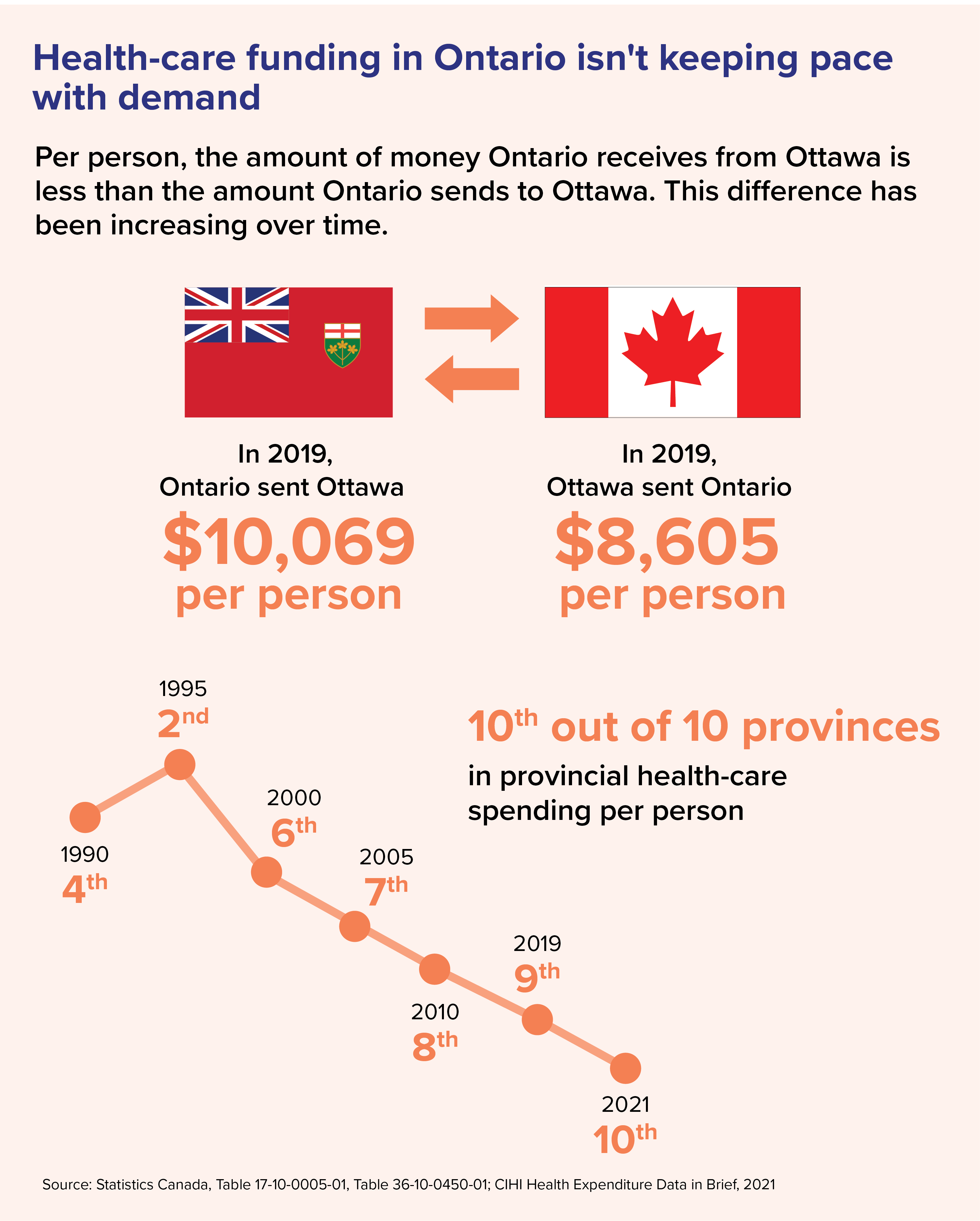 That would give Ontario an additional $10 billion allowing the province to clear the backlog of care created by COVID-19 and fix the cracks in the health-care system that widened during the pandemic. Ontario has fallen so far behind in health-care spending over the last 30 years that it needs to invest an additional $5 billion a year just to reach the national average.

“We’re urging the provincial government to take steps in this week’s budget to reverse 30 years of chronic underfunding by all parties,” said OMA President Dr. Adam Kassam. “But Ottawa needs to do its share to put Ontario back on course as being a national leader in health care, for the sake of our patients and our economy.”

Ontario budgeted $74.1 billion for health care in 2021-22. But Ontario is projected to spend less on health care per capita than any other province or territory, according to 2021 data from the Canadian Institute for Health Information. This is due, in part, to a decrease in per capita spending in the 1990s, flat spending between 2012 and 2016 and spending below the minimum required to keep pace with demand in other years.

Today, Ontario’s per capita health-care spending is about eight per cent lower than the average of other provinces and territories, according to CIHI. Ontario’s own Financial Accountability Office notes that the province’s base health-sector spending plan in the 2021 budget called for per capita spending to decline by an annual average of 0.5 per cent from 2019-20 to 2029-30.

To bring Ontario to the national average would require an investment of about $4.8 billion. Increasing the Canada Health Transfer to 35 per cent of health-care spending would cover this.

While it was originally envisioned that health-care spending be shared equally by the federal government and the provinces and territories, Ottawa’s share has decreased over time. Today, the Canada Health Transfer funds only an average of 22 per cent of total provincial health-care costs. Ontario has lost billions of dollars that could be used to provide better health care for all its residents.

The OMA has a roadmap for better health care with 87 specific recommendations: Prescription for Ontario: Doctors’ 5-Point Plan for Better Health Care. Taken together, the recommendations in Prescription for Ontario offer a comprehensive, integrated solution to ensure that current and new health-care dollars are effectively spent, address the current and new demands that will be placed on the system and improve care for all Ontarians.

Among the many demands that Ontario’s health-care system will face in the coming years are:

“Spending more money alone is not how to make Ontario a place where people want to live, work and invest,” said OMA CEO Allan O’Dette. “The province also needs more doctors, personal support workers and other health-care professionals at a time when many are retiring or leaving the profession because of burnout exacerbated by working on the front lines of the pandemic.”

Ontario ranks seventh among Canadian provinces in number of doctors per 100,000 patients (2.3) and has one of the lowest doctor-to-population rankings among OECD countries (29 out of 33). The shortage is especially acute in northern and rural areas.

The Ontario Medical Association represents Ontario’s 43,000-plus physicians, medical students and retired physicians, advocating for and supporting doctors while strengthening the leadership role of doctors in caring for patients. Our vision is to be the trusted voice in transforming Ontario’s health-care system.

Advocacy, Health System Transformation
Back to Top
We use cookies to understand how you use our site and to improve your experience.
Use of Cookies Policy